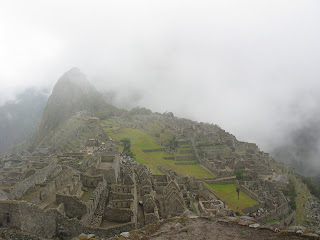 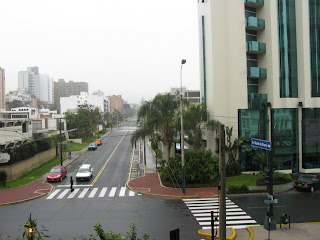 Our Continental flight left on time from Vancouver to Houston, and actually got in early. Met up with the others in our group before boarding our next flight to Lima. This flight would have gone by faster had the entertainment system worked for us at the back of the plane. There would have been many movie/show/music/game options, instead we got nothing but the flight map. Oh well! We arrived into Lima and met our tour guide that will be with us for the whole trip. He gave us an overview of things we needed to know while transferring to the hotel. We're staying at the Libertador San Isidro, which is in a nice area of Lima. This is the view from our room. 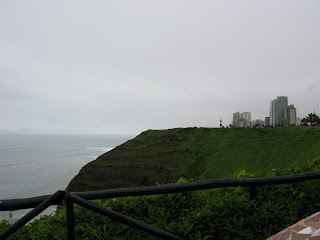 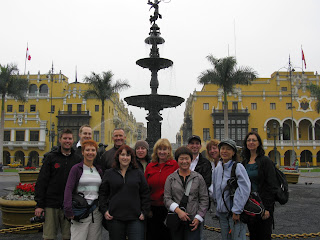 This morning we woke up to misty, overcast and cool weather. We had buffet breakfast at the hotel before heading out on our half day tour of Lima. We started out by going to the waterfront to see the dramatic cliffs and a small park filled with lots of art. Then we drove through some of the different districts of Lima. One area had ruins right in the middle of residential areas. Then we started our walking portion of the tour and saw many colonial squares including the Plaza Major. Then we went to the largest church in Lima to visit the Catacombs where about 25000 people were buried. Next we had a delicious lunch before walking back to the hotel to quickly grab our stuff and rush off to the airport for our flight to Chiclayo. An hour later and we're in northern peru. We had dinner at a top rated restaurant, I even tried goat! Staying at the Gran Hotel Chiclayo for 2 nights. Long day tomorrow starting at the crack of dawn! 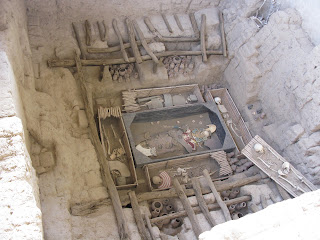 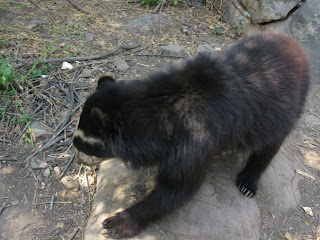 We were on the road by 630am this morning as we had a lot of ground to cover. We started by going to an archeological site where they have found the Royal Tombs of Sipan. While wandering around the site our group leader managed to accidentally drop her stuffed llama into one of the tomb sites. It did get saved. Next we headed back into town to visit a museum where they have showcased the artifacts retrieved from the tombs. It was a very worthwhile visit, although 3 of us in the group weren't feeling too well. We pushed onwards far outside of town (about 2.5 hours driving each way) to the Chaparri Reserve where the rest of the group took my camera on the hike that I felt too weak to participate on. Here's a great picture of a spectacled bear that the group saw. Back to the hotel for dinner and then early to bed.
Day 4 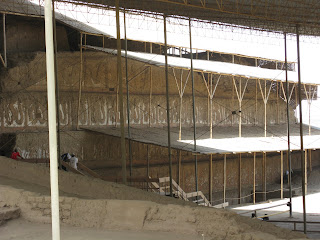 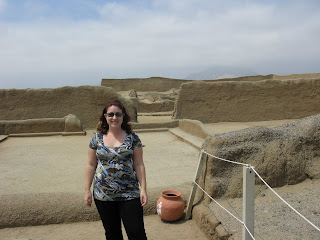 After a sleepless night for me, we had a very early morning. We left Chiclayo and had a 3 hour drive to Trujillo. The local guide boarded just on the outside of town and we went to check out our first site of the day, Huacas del sol y del luna. (Temples of the sun and the moon) These temples were built by the Moche and were a different style than what we saw later on. This temple was a royal burial structure, each layer was added as someone died, and you can still see the colour of the original murals. Next we went to the Chimu built palaces of Chan Chan. Located on the coast, there are 9 massive palace areas, again each one added as the predecessor died. We only walked through one of these palaces and it was absolutely massive, with huge walls made of adobe brick plastered over. There is restoration and preservation currently going on all over these grounds, which will hopefully save the site for the tourists that are only just starting to come to this area in Peru. Next we had lunch in the Huanchaco beach resort area near Trujillo, and then had some free time to wander along the malecon. Off to our hotel for a bit of free time before dinner.
Day 5 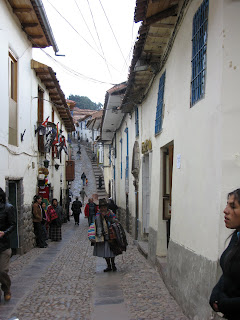 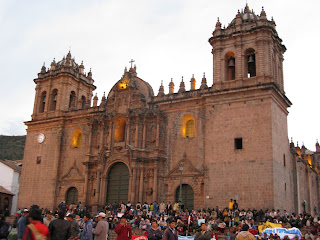 Up early again for a few flights to get from Trujillo to Cusco. Cusco is located at an elevation of 11,000 feet high in the Andes. We were warned about high altitude sickness, so far no one in our group has really felt it. After checking into our boutique hotel, the beautiful La Casona Inkaterra, we headed out for lunch and a few hotel inspections. Along the way we passed through the main square where a demonstration was happening, there were hundreds of people and many police men in riot gear. The protest was about the building of a local university. Cusco is a beautiful , although touristy city of about 400,000 inhabitants. In the evening we had dinner and a nice walk through town when it was all lit up. 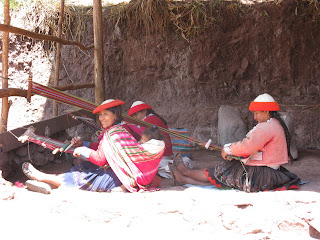 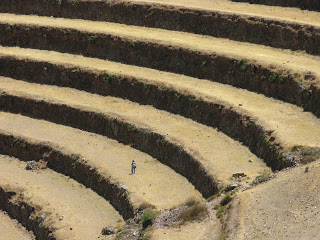 Today we left Cusco to head through the Sacred Valley which leads to Machu Picchu. First stop was at the Women's Weaving Project in the Ccaccaccollo Community. With assistance from Planeterra (established by GAP Adentures in 2003) this group of women uses ancient techniques to produce many crafts. Only GAP Adventures groups can visit this village to see each step of the weaving, and to have the opportunity to purchase items. We also got to see a homestay family house, and the local kindergarten. Next we visited the Pisac Inca Terraces. There are terraces similar to these scattered all over, but at Pisac is one of the largest. These terraces were used for farming, mainly corn and potatoes. Lunch was next, followed by our arrival into Ollayantaytambo. This is where we caught the train to Aguas Calientes which is at the base of Machu Picchu. Ollayantaytambo is also the gateway for anyone interested in hiking the Inca Trail. Early to bed as a very early morning to visit Machu Picchu.
Day 7 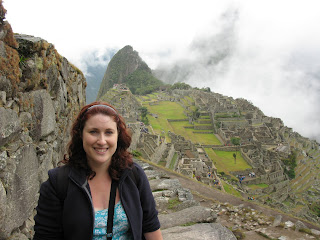 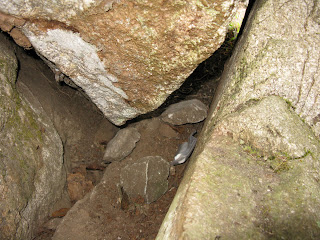 Up at 4am so as to be ready for the first buses that head up the mountain at 530am. There are 32 buses, we ended up on #9 and the others would have filled up right away as well. We were able to get our passports stamped going through the entrance, and then met up with a local guide for a 2 hour tour through Machu Picchu. He told us excellent information and we all learned a lot about the Inca culture which helps to appreciate the ruins. After the tour we were free for the rest of the day to do any trails/hikes or just wander through the park. Some in our group opted to climb up Machu Picchu Mountain, which gives you the highest perspective over the ruins. I decided to take it easy and attempt to find a geocache or two in the park. Geocaching is a worldwide treasure hunt using a gps, it's so much fun. The first one was fairly easy to find, just off of a main trail. The second one I was unable to find, which was disappointing. We had a bit of free time back in Aguas Calientes when finished at Machu Picchu before taking the train back to Ollayantaytambo, then a bus back to Cusco. Had a bit of fun this night at some local bars, really shouldn't have stayed up so late after being up at 4am! 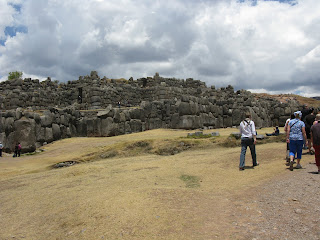 Day 8
Very laid back day today, which is really nice because the pace of the trip has been pretty frenetic. Started out with a 3 hour tour of some of the surrounding Inca ruins near Cusco. Then, had the remainder of the day to rest or do some shopping. 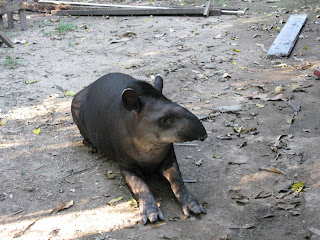 This morning we got on another flight to get to Puerto Maldonado, in the Amazon. Upon arrival we were picked up by a member of the check in staff who took us to their building where they do check in. They do this right by the airport because you then get on a boat which takes you 45 minutes downriver to the hotel in the reserve. At the check in building they had a lovely huge tarantula crawling around, and also had a butterfly garden. The boat ride was very nice as it helped to cool us down, the weather was 36 degrees with full humidity. After arriving at the hotel, we dropped off our luggage and went on an afternoon jungle walk. We were in two small groups, each with a nature guide. Our group got to see a Tapir, which is a large pig/anteater type of animal about 140 kg. It was friendly enough at first, but then decided it wanted to play and got aggressive. Our guide had to chase it away twice as it started to nibble at two in our group. Once it got dark we were back on the boat doing a night tour along the river, trying to spot wildlife. We saw some caymans (alligators basically) and had an amazing view of the stars. Meals were all quite good, and were served in the main house. Our cabanas were nice, with just screens to try to keep out the bugs. We slept under mosquito nets, and fell asleep to the sounds of the jungle. 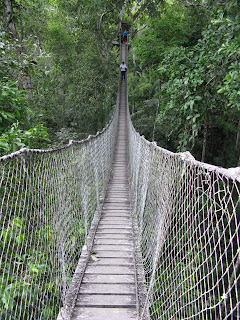 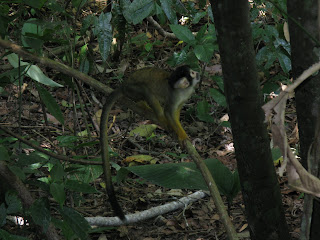 Up early this morning to go for the canopy walk. We climbed up a 30 metre tower to get on the first of seven bridges strung between trees. It was a neat perspective to be at the top of the trees, saw many birds and butterflies. Also, there was a group of squirrel monkeys that played in the bushes around the hotel. Sometimes they got up a fair bit of speed swinging from tree to tree. In the afternoon some of the group went to Lake Sandoval and saw pirahnnas, caymans, birds and butterflies. I stayed behind and tried out the spa, had a fabulous cooling massage. Also played some games in the main house while waiting for the others to return. Early to sleep tonight as the generator shuts off at 10pm and it gets quite dark. 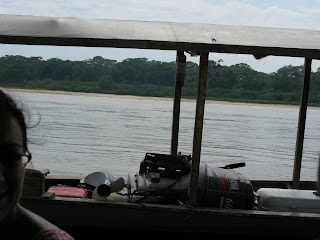 Mainly just a travel day to get from the reserve to Lima. Our boat trip back upriver to Puerto Maldonado had a bit of misadventure when the driver ran over a log and busted the motor. Another boat was called to come rescue us. A quick motor switch later and off we went again. Flight from Puerto Maldonado went via Cusco, had a nose wheel change and a short delay because of a lightening storm. Took off into the storm and had a bit of turbulence. Landed in Lima in the afternoon and had a bit of downtime before one last dinner together. 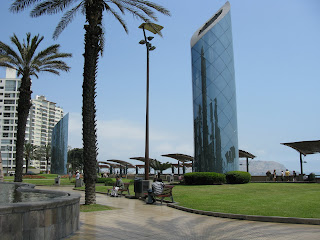 Whole day is free until our 8pm transfer to the airport. Wandered from the hotel towards the ocean, taking in a bit of shopping and got one geocache along the way. Late night flight from Lima to Houston.


Early morning arrival in Houston, followed by a 15 hour layover. Luckily our group leader had procured lounge passes so we spent most of the day in there. Also went outside of the airport in the morning and found one geocache, during a downpour! Then back to Vancouver at midnight, overnight in Vancouver and back home the next morning.
Posted by Christie 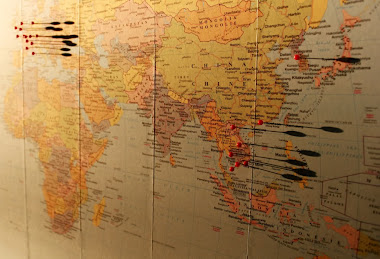